Warning: mktime() expects parameter 4 to be long, string given in /home/ilya/webapps/suodatin/fathom/blogFunctions.php on line 120
 2017 (Fathom this!)

Nine prototyping tools compared. Because none are perfect but choosing the right one matters.

The discovery and loss of the cure to scurvy

I just re-read Maciej Cegłowski’s excellent essay on the discovery and loss of the remedy to scurvy.

Incidentally, I’ve seen scurvy used as a case study of how theory colours evidence (or directs the interpretation of it) before in Lukas Vermeer’s talk Creating data: a boat filled with sauerkraut.

There are loads of quotable passages, but rather than try to condense a great read into a few snippets, I’ll share a somewhat ancillary tidbit:

[T]echnological progress in one area can lead to surprising regressions. I mentioned how the advent of steam travel made it possible to accidentally replace an effective antiscorbutic with an ineffective one. An even starker example was the rash of cases of infantile scurvy that afflicted upper class families in the late 19th century. This outbreak was the direct result of another technological development, the pasteurization of cow’s milk. The procedure made milk vastly safer for infants to drink, but also destroyed vitamin C. For poorer children, who tended to be breast-fed and quickly weaned onto adult foods, this was not an issue, but the wealthy infants fed a special diet of cooked cereals and milk were at grave risk.

The essay contained two words new to me: antiscorbutic — having the effect of preventing or curing scurvy; and austral — of or coming from the south.

Freshly Remember’d: Kirk Drift. An epic essay on how Star Trek’s original captain is so misremembered — and why it matters.

It starts off with a bang:

Good parties diverge widely; all bad parties are bad in the same way. I am trapped at a dull dinner following a dull talk. […] The man sitting across from me and a little down the way, a bellicose bore of vague continental origin, is execrable. He is somehow attached to a mild woman who is actually supposed to be here: a shy, seemingly blameless new grad student who perpetually smiles apologetically on his behalf, in an attempt to excuse whatever he’s just said. […] We reach the point of no return when the omnijerk (really I suspect there’s just one vast eldritch horror sitting in another dimension that extrudes its thousand tentacles into our own, and that each one of This Guy is merely an insignificant manifestation of the beast: they couldn’t all be so boring in precisely the same way by chance, surely) decides to voice some Dinner Party Opinions on original-series Star Trek. God knows why. It’s not five seconds before he’s on ‘Kirk and the green women’. He’s mocking the retrosexist trope, but smiling a little weirdly while doing it. His own insufficiently private enjoyment is peeking out, like a semi-erection on his face. […] “You’re thinking of Pike,” I say. “The captain in the unaired pilot. Some of that footage got reused for a later story, which made Pike into a previous captain of the Enterprise. And it never actually happened — it was a hallucination sequence designed by aliens who didn’t know what they were doing in order to tempt Pike. He rejected it.”

The essay is persuasive, funny and rich with examples that made me go and re-watch some of the episodes mentioned. I’ve cherrypicked a few fragments that resonated with me, but you should really read it in full. (It will take some time.)

Why can’t we see what’s in front of us? Why can’t we read? Why do we remember green women, molested, when there weren’t any, and the wrong “three little words”? Why has Kirk Drift occurred, affecting this character and this text? I contend this is not just random mismemory, but a sort of motivated, non-accidental, culture-wide process of forgetting. It’s the result of a kyriarchal tendency in reception and in memory that affects not only the reboots, but even our ability to see what happens in a text. Even when it’s right before our eyes, we can’t see Star Trek for our idea of it.

It’s not just about Kirk:

Kirk Drift is strongly at work in our popular histories as well as our texts. We are always being robbed of our radical inheritance: of black stories, of queer stories, of rupture.

The “Zapp Brannigan says Trump quotes” meme is not in and of itself anything like so directly, screamingly incorrect. It is, however, exemplary of the drift to toxic masculinity that made these ridiculous figures possible. If Brannigan is a parody of heroism, he must necessarily also represent an actual idea of it, and what art reflects it also helps create. The fail condition of subversion/parody is reification. We have laughed Zapp Brannigan right into the White House.

There’s a fascinating contemplation over what’s worth forgetting but ultimately the author makes the case for the importance of a diverse memory:

If history is written by the winners, then people with power will always be the ones who control what is remembered, and marginal people’s truths and histories will be what is occluded. It is thus now. We cannot live without memory (and to do so would be to live without meaning). Given this, it becomes a question of what survives.

What happens to older programmers? and other questions on Quora

Quora: What happens to older programmers? Some become managers, many keep coding, the answers are pretty good. Keep in mind that there’s hardly been many old programmers yet.

As an aside, I find Quora questions fascinating. The questions run from the practical to the existential (what’s the point of life?) to the polemic (don’t good programmers use ‘else’?; will PHP die out in 2017?).

There’s something both startling and amusing when someone asks: what are the best gems to be used with Ruby on Rails for a dating / social network website? — and receives candid answers! I appreciate the specificity, but that’s baldly a bold ask.

I suppose what’s most fascinating is what the questions say about us.

Normalised or not, SQL is 43 years old and the 2nd most common language

Perceptual neuroscience — it’s all in the eye of beholder

I quite liked Beau Lotto’s article Look Here in May’s Wired UK. It’s not yet online, but googling it turned up a few other interesting tidbits on perception.

Beau Lotto has just published a book, Deviate: The Science of Seeing Differently, though reviewer Jonathan Rée hates it.

Michael Shemer’s TED talk, The pattern behind self-deception, explains how “the human tendency to believe strange things—from alien abductions to dowsing rod—boils down to two of the brain’s most basic, hard-wired survival skills. He explains what they are, and how they get us into trouble.”

Buzzfeed: 16 optical illusions even freakier than that damn dress.

Six TED talks about illusion that will make you doubt your own brain.

How to upgrade OpenSSL on Mac OS. Homebrew issues led me down a lovely garden path… and this guide helped.

Explicitly specifying the OpenSSL can work when installing a new version of Ruby with rbenv.

Varying contexts of sense and ability

This diagram listing varying degrees of ability in different situations, from Inclusive Design at Microsoft, is handy if you ever need to explain the need for accessibility and usability. 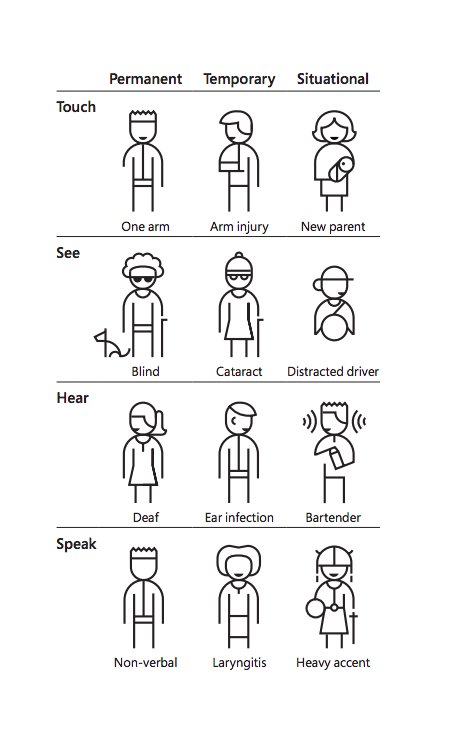 Cockroaches live in a democracy

Cockroaches govern themselves in a very simple democracy where each insect has equal standing and group consultations precede decisions that affect the entire group, indicates a new study.

Halloy tested cockroach group behaviour by placing the insects in a dish that contained three shelters. The test was to see how the cockroaches would divide themselves into the shelters.

After much “consultation”, through antenna probing, touching and more, the cockroaches divided themselves up perfectly.

For example, if 50 insects were placed in a dish with three shelters, each with a capacity for 40 bugs, 25 roaches huddled together in the first shelter, 25 gathered in the second shelter, and the third was left vacant.